Inspiration at the 7-Eleven: #Leadership 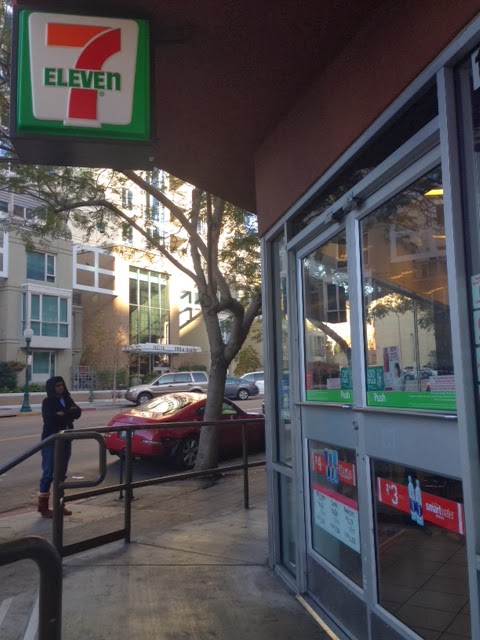 When we tell people to do their jobs, we get workers. When we trust people to get the job done, we get leaders. — Simon Sinek

I’ve been lucky enough to hang out in San Diego for the past month.  I have my new granddaughter, Lucy, to thank for keeping me out of the harsh NewYork cold.

My daily routine includes getting up early and going to the 7-Eleven on the corner of Beech and State to get a cup of coffee and it always includes nice conversation with the people working there.  For example, early Christmas morning, I happened to ask the cashier how his Christmas Eve had been and then he gave me the most spiritual description of Midnight Mass at St. Paul’s Cathedral.  He was so peaceful telling me about the music and the lighting of candles.

It seemed as if he was totally in the moment and appreciating every aspect of life.  It suddenly dawned on me that if he was at Midnight Mass, he must have only had a couple of hours of sleep.  He happily told me that four hours of sleep was fine and he was able to get off in the afternoon to celebrate the holiday with his family.  Not one complaint.  Not one.

I don’t know what it is, but every employee there is exceptionally nice.  They’re not just nice to me. A handful of homeless individuals frequent this store — begging outside on the corner before they go in. They are also treated with kindness.

It’s gotten to the point that if I’m feeling a bit blue or sleep deprived, I look forward to going in there for a boost.  And it’s not the caffeine because I only drink decaf.

It’s a culturally diverse group of employees but they all seem to have one thing in common.  They know how to treat people and seem to be genuinely interested.

As I was fumbling around with the simple but complicated process of pouring that first cup, I asked the 20-something guy who was efficiently restocking creamers, if it was a good day.  “It has to be,” he said.  I wasn’t 100% sure of what that meant so he explained, “It’s my choice to make it a good day and so it has to be a good day.”  And by making it his choice, he made me aware that it was up to me, too.

Leaders work everywhere and do every type of job.  Doing a good job takes commitment and a positive attitude.

Good lessons for our children.  (And speaking of children, there’s an awesome woman there who has 5 children, two grandchildren, and looks 20 years younger than her actual age and I think it’s because she has an optimistic attitude!)

Look for leaders wherever you go.  You can even get inspired at a 7-Eleven.

PrevPreviousLeader Nelson Mandela Was a Child Once
NextGetting Creative and Teaching Leadership at P.S. 55Next