Bullying and a Lesson in Forgiveness 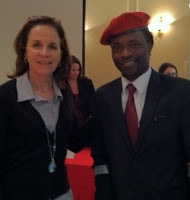 On Wednesday night, I had the pleasure of speaking at St. John’s University. Along with me, were four other presenters, including Hashim Garrett, a Guardian Angel, an outstanding speaker and an unforgettable person.

He spoke about his experience as a young boy looking to belong…so he joined a gang. At the age of 15, he was shot 6 times in the legs and spine by someone looking for revenge. He spoke about “dying” and his soul separating from his body but the sound of his mother’s voice in the ambulance, doing what he says mothers do best — nagging — brought him back. And he was grateful. He said that as he lay dying, it wasn’t his fellow gang members he thought about. It was his mother. (He also made me laugh when he said that one of his thoughts as they put him in the ambulance was that his mother would be proud of him because he was wearing clean socks!)

After 6 months in the hospital, he was sent home to cover both physically, emotionally and spiritually. Since then, he has spent his time talking to kids about FORGIVENESS. As a teen, he was able to dig down as deep as a person can go to find the courage to forgive the person who shot him. But even more important, he says, he forgave himself. He forgave himself for the bad choices he made as a 12-15 year-old who chose the wrong path in order to belong.

His talk came at the end of four presentations about the tangled mess of bullying, cyber bullying and suicide. Although forgiveness wasn’t necessarily something I thought of as part of the bullying prevention dialogue, it was the perfect thing to round out the evening.

One of the strings in this tangled mess is forgiveness and growth. These are kids. Kids make mistakes and hopefully, they don’t all have to learn through drastic means, that you learn from your mistakes.

You can overcome mean behavior, you can respect others and grow from being that child who tries to belong any way possible. That’s our job. Whether they’re the bully, the target or the bystander, we need to help them grow…and be kind…and forgive.

Why forgive? It breaks the cycle. It brings new life.