A Tree of Hope In a Sea of Sadness

By Susan RaischDecember 3, 2012 No Comments 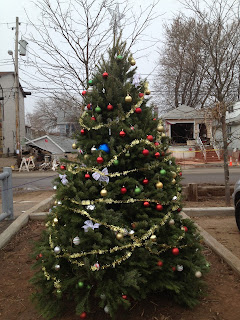 These are not ordinary times on Staten Island.  For my neighbors in New Dorp, the days are full of feeling overwhelmed.  It’s getting colder and confusion and sadness are growing deeper.  You would think, though, that as the holidays approach, the residents would give into despondency.

Yesterday, I went to the sweetest Christmas decorating ceremony I’ve ever been to, and that includes the year that I was standing next to David Rockefeller as THE tree was being delivered to Rockefeller Center.

First, there was a Mass at Our Lady of Lourdes Church on Cedar Grove Avenue, which now looks like a war zone.  It was the coldest (still no electricity in the building) — but yet the warmest — Mass I have ever been to.  Storm or no storm, the church bells were rung at 9:30 am.  Those parishioners sticking it out in their homes all gathered.  We could literally see our breath but no one seemed to mind.

Immediately following, we went to the parking lot where a small plain tree just stood there waiting for about four dozen of us. There was no music and the scene in the background was impossible to describe.  Homes and delis that were there a month ago were gutted, torn apart by the surge of water and kneeling on the ground.  It was cold and dark but spirits lifted when ornaments were taken out of packages and passed around.

Other than a handful of us, most everyone else placing an ornament on the tree will not be able to have Christmas at home. And for some, not be able to celebrate at home ever again.

That didn’t stop them from smiling, laughing and loving this little tree.  As we placed gold, red, blue and green balls on the tree and grown men strung the garland,  people forgot for a minute what they were going to do, where they would be and how they would get through that day and the next.

As a joke, two men had strung together an empty six pack and placed it at the bottom of the tree.  Nope. Sandy didn’t rob them of their spirit!

It doesn’t matter what holiday you’re celebrating or what symbol you use to unify, please remember the people gathered around that little tree of hope. 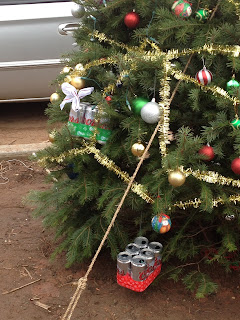