They didn’t know her. Geoff Rawling, a mural artist, Gary Russo, the 2nd Avenue Sinatra, and Rap artist JoJo Pellegrino came together at a local watering hole in Staten Island to offer their talent to help raise money to help cover the funeral expenses for Amanda Cummings, the 15 year-old who stepped in front of a bus holding a suicide note.

It’s believed that bullying played a part in Amanda’s decision.

Midland Beach, Staten Island, isn’t fancy. It’s real…and the reality is that it’s a community in shock that one of their own — and someone so young — could feel this desperate.

In the midst of this tragedy, it’s important to stop and appreciate the people who step up. They don’t have to but something in them propels them to lend their talents to help.

They deserve our respect. 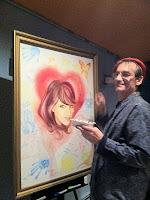 Geoff Rawling is an artist specializing in murals. Geoff laments that arts programs are being cut from schools at a time when kids could really benefit from using the arts to express themselves.

JoJo Pellegrino created a rap song, along with NYC Arts Cypher, for Amanda called “Alone.” Amanda’s mother told me that “Alone” expressed exactly what Amanda was going through. The lyrics ask, “Are we listening?” 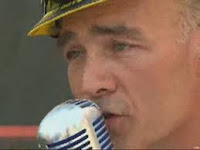 So what we wish is that Amanda didn’t feel “Alone,” and that the beauty that Geoff captured in her mural would have been how she felt inside and Gary’s rendition of New York, New York would have made her realize that there is a whole city waiting and willing to embrace her.

Our prayers go out to Amanda and her family. To honor her memory, there are thousands of Amanda’s that we can step up for, embrace, understand, mentor and show that they are not alone, they’re beautiful and they belong.

Thank you for sharing your talents Geoff, Gary and JoJo and for showing us all that we have something to give.