Thankful for the People Who Step Up: ABC: Anti-Bullying Coalition

By Susan RaischNovember 22, 2011 No Comments 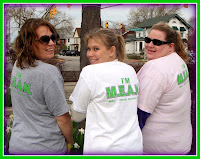 Are you ever curious how and why certain people become involved in the bullying prevention issue?

Recently, I became aware of a great site and facebook page for ABC: Anti-Bullying Coalition. It’s really inclusive. It made me wonder who started it and why. When I found out the founders, Cari, Candice and Aunt T, are based in Michigan City, Indiana, I almost fell off my chair. I grew up in Michigan City (Long Beach, specifically) and although I was 13 when we moved and I have no family there, I still consider it “home.”

We are passionate about implementing pro-active anti-bullying solutions into our school system and as far around the world as we can grow! We have found such need in our community to advocate for families as well as help change the belief that “kids will be kids” and “it makes them stronger” with the knowledge that even one bullying episode can have life long negative effects. And although our program is currently focused on school time bullying, we hope to spread the word; bullying is a personality and it spans all ages and crosses all boundaries; race, religion, size, gender, socioeconomic status, educational level, sexual orientation and does not stop in High School but continues on to the workplace, retirement homes, private clubs, organizations, it’s everywhere.

Why They Stepped Up:
Cari’s Story:

There are moments in life that change us, define us for the next chapter, and it was one of those moments that inevitably led to the creation of ABC. I am a mom of three children, distinct and wonderful in their individual ways. When people ask me why I started ABC, they are always surprised when I tell them it’s not because I was bullied, or because my own children have faced it…. Is it a factor behind it? Yes, of course…. But it was not the inspiration. Instead the inspiration came in a defining moment, when I found myself openly crying in my office after reading yet another story of a child who had taken their own life due to bullying. I empathized with the child that felt it was their only escape and as a parent, who cannot imagine the pain of losing a child. It is my greatest fear. Right then, I decided I would do “something” in the fight against bullying.

I researched it heavily, wrote letters, connected with teachers and friends… I talked with my fiancé of knowing this was “something” I was meant to do, but I didn’t know what that “something” would turn out to be. The “something” became clear, when my best friend, Candice, put me in touch with moms locally whose children were facing bullying and were being silenced by the school system. ABC was created within days and I continue to look forward to a future so bright “I have to wear shades.” ☺ I am determined to end bullying…. That is my goal, and while there may be those who scoff and say, “That’s never going to happen,” it only makes me that much more determined. Each time I learn of another child’s death, I cry tears… tears for the child, tears for the parent, the family and the friends… and my resolve strengthens. We CAN change this society from one of cruelty and violence to one of kindness and empathy. We CAN stand up, band together and have our voices heard. We CAN do all of these things….. together.

I am involved with ABC: Anti-Bullying Coalition for many, many reasons, but the main desire to help end bullying stems from experiences I had during my high school years.

When I was younger, I was teased, bullied, and sexually harassed beyond belief because of my large breast size, which lead to taunting and malicious rumors being spread about me. Because of the extreme personal nature of the bullying, I was too ashamed to tell my parents, a teacher, or an adult about the harassment. I am still ashamed about it to this day.

As a result, I developed severe anxiety issues relating to school, especially the classes that included my tormentors. Eventually, I had skipped so many classes, and missed so much school that I had to be pulled out and “homeschooled” for the remainder of the school year, and the administrators recommended that I attend the city’s Alternative High School the next school year. This “punishment” ended up being my salvation.

The alternative high school’s atmosphere was completely different from that of the public school. It was more family oriented, with students comfortable enough to stick up for fellow students when issues would arise, and teachers and administrators sincerely cared for their students, which was constantly demonstrated through their actions. Here, my self-confidence flourished, here I thrived. The shy, quiet, self-conscious girl who was so ruthlessly tormented at her previous school found herself standing up for others, and standing up for herself. The Alternative School was not perfect by any means and issues of bullying DID go on, but incidents were not swept under the rug and were dealt with by the administrator’s head on. Because of their actions, I have experienced a school environment that did not tolerate bullying on any level; I know from experience that such a place CAN exist. I also know how a school like this can heal a person’s soul.

I have always had extraordinarily strong feelings about right vs. wrong. I am frustrated by injustice in this world and voice my opinion frequently. They are not always popular or well received, but I have always felt it is vital to not just sit back and watch someone be treated as inferior. To me, this is condoning the behavior/treatment.

Sometimes it is very hard to look someone in the face and ask them to not use a derogatory slur or questions their strong beliefs if they differ from my own. But I am confident enough in my beliefs that I usually don’t let intimidation hold me back. The same cannot be said for all people I am friends with or even folks in my family. I would sit back and watch people laugh off comments that I know for a fact they do not believe or feel acceptable. I would question them later, inquiring as to why they didn’t “correct” the person or verbally “defend” their beliefs? Without fail people would say; “What good would it do? It won’t change their beliefs”. While I understand why people feel this way, it is an unacceptable belief. It falls into the “If not now, when? If not me, who?” philosophy.

If I don’t highlight right from wrong, I am NOT honoring my beliefs. If I don’t fight to keep our children safe from the torture of bullies, who will? If I didn’t help change peoples view, language and level of acceptance… I am condoning, therefore perpetuating, the prejudice. This crosses over into bridging the communication gap between school systems and families.

I do not believe our school systems are ambiguous. I believe most teachers and administrators care deeply about our children. Likewise I believe parents are acutely aware of their children’s physical and mental well being. But so many people seem to get stuck on the accepted bullying wheel. Many beliefs and sayings are widely accepted by society; schools and homes are just microcosm of society. Bringing schools and families together to work through bullying issues changes society.

One child, one family, one school, changes society. That is why I am part of ABC: Anti-Bullying Coalition. Even one family helped, one mind changed, one school made more aware – profoundly impacts society. I stand up for what I believe in. I fight for what I feel is right not only for my own but for those who are unable or unwilling to do so for themselves. “Prejudice is learned. Teach acceptance” is my gospel. Aunt T~

Inspiration from Michigan City makes me thankful. (And wonder what the MEAN on their t-shirts mean? It’s “Moms Expecting Acceptance Now!” Where does your inspiration come from? Would love to hear your story.

P.S.: The “MEAN” on their t-shirts stands for “Moms Expecting Acceptance Now!” (Moms are so “mean,” and in this case, it’s a good thing!)