Leader Nelson Mandela Was a Child Once

By Susan RaischDecember 11, 2013 No Comments 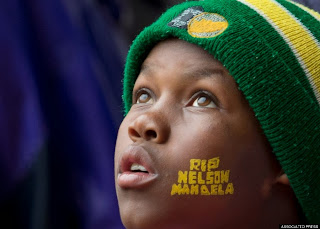 What counts in life is not the mere fact that we have lived. It is what difference we have made to the lives of others that will determine the significance of the life we lead.” — Nelson Mandela

Two small stories from two different locations caught my attention this week but they had one thing in common. They were about resilient two 7-year olds who didn’t give in to meanness.  As we mourn the loss of Nelson Mandela, one of the greatest leaders of all time,   the stories of Christian and Gabbie gave me hope that resilience, kindness, loyalty and bravery didn’t die, too.

Second grader Christian Bucks from York, Pennsylvania, noticed that some kids feel lonely at recess.  Although, just the mere mention of recess for most children brings on euphoria, for many others, it’s not so fun.  When children don’t have anyone to hang out with, or worse, if they are a target for mean behavior, it feels long and uncomfortable.
Christian’s simple solution?  A buddy bench.  His 7-year old instincts told him that everyone needs a safe place.
The second story is about Gabbie, a young girl from Greenwood, Indiana, with a big heart and big challenges.  Gabbie suffers from a genetic disorder, neurofibromatosis, which causes tumors to grow on the nervous system and can lead to learning disabilities.  The disease can mimic autism and result in a degree of social awkwardness.  As she became older, Gabbie started to become aware that she wasn’t included in social activities, including getting invited to parties.
Heartbroken, Gabbie’s mom made an online appeal through Monkee See-Monkee Do for people to send Gabbie cards.  What happened next gave me hope that there are many little leaders out there.  Gabbie received hundreds of cards from adults and kids cheering Gabbie on and making her feel loved.
It was a gift for both the receiver and the giver.  Encouraging children to step up for others is a tremendous lesson.  To all the parents who told their children this story and pulled out the paper, pens, glue and glitter to help them write a card to Gabbie, way to go.

Nelson Mandela was a child once.

We have the chance to nurture great leaders.

“Sometime It Just Takes One.”