Goodbye to My White House Pal 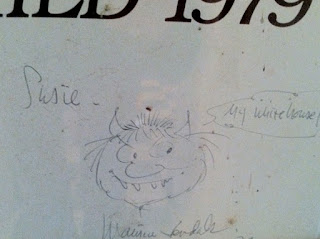 Yesterday on Twitter, my son had posted, “A fond farewell to my mom’s ‘White House buddy.'” That’s how I found out that Maurice Sendak had died.
I met him years ago when I worked for Shirley Katzander.  And although part of me admired Shirley,  I still think that the “Devil Wears Prada” movie was really about her.  Shirley was a dynamo.  (For example, I’ll never forget the day she let Mike Wallace have it.)  Her clients ranged from Playboy to  Simon and Schuster to Reading Is Fundamental (quite a leap from Playboy to RIF.)
During the 1979 International Year of the Child campaign, RIF sponsored a day of reading at the White House.  Jimmy Carter was in office and Rosalind and Amy were our hostesses.   That’s when I met Maurice Sendak.  He was commissioned to do a Where The Wild Things Are poster and he was the special guest at a White House press conference and reception.   Other guests were NBC’s John Chancellor,  tennis champ Arthur Ashe, and comedian Carol Burnett (who went out to the hall and called out AAAAAAAMY in the direction of their private quarters to make sure the teen was on her way down so the festivities could start.)
As I mentioned, Shirley was a piece of work but getting to go to this event was worth every grueling minute I worked for her.  Maurice and I got along right away.  He was like a little kid himself in his excitement over being there.  He had become a bit of a recluse so being at the White House where everyone was so thrilled to be with him, was adding to his exuberance.
Towards the end of the day, Mrs. Carter asked Maurice if he wanted a private tour of the White House…and he turned and said, “Come along with me.”  So Mrs. Carter took Maurice Sendak and I around the White House, pointing out tidbits about the different china and why the “blue room” was special.  Every time she turned around, Maurice and I would look at each other and mouth, “Are you believing this???!!!!!  It’s Rosalind Carter showing us around the place!!!!!!”
The tour ended and so had the event.  When we got back to the lobby, everyone was gone. We walked outside expecting to see our limo.  No limo.  No Shirley.  She was annoyed so she just left us.  The guest of honor…and me.
We got to the end of the driveway having no idea of how to get to our hotel and we had no money.  My purse was in the limo.
So Maurice and I walked a block, then sat on the curb and laughed our heads off.  So much for special treatment.
When we got our bearings, we kept walking and talking about life.  About what success is and how hard it is to put yourself out there.  I was about to get married and we talked about that…and we talked about how much trouble I was going to get into when we got back to the hotel…and about how you need people even though sometimes people are hard to understand.  He talked about how the day had made him feel more like getting back into the world after his work had been criticized.  (That didn’t last long because he is now considered to be one of the most important children’s authors of all time.)
We got back to the hotel and of course Shirley was mad but Maurice magically made that all go away by telling Shirley that it was his fault and that he was grateful that I came with him…and then he drew one of his wonderful monsters on one of his posters and signed it to me, “To Susie, My White House Pal  October 11, 1979.”
That poster hangs on my wall and although slightly damaged, it gives me total joy.  When I need a laugh, I think about walking down the White House driveway with this great artist and author, who took himself lightly that day.
I’ll never forget it, Maurice.  Thank you.  And I must remember to always take myself lightly.  It’s so much more fun.
Love0 Share Tweet Share 0 Share Pin