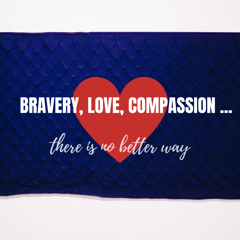 Although I was young, memories of the civil rights era are vivid.  Fifty plus years later, the events over the past several years are forcing critical and past due reflection. The thoughts keep circling back around to one word: enough. Did we, as a white society, feel that the progress made during the civil rights movement was enough? Was it  good enough — or was it crumbs compared to what it takes to create lasting and genuine equality?

Why do we as a country — after all this time — have to take a stand and pronounce that Black Lives Matter?  I worry when I hear some of my generation (and who tend to be white) argue that the proof of past progress — and what some consider success — is the fact that there are now more Blacks represented in medicine, law, politics, media, academia and business. Wasn’t the goal reached? Official segregation, they say, is a thing of the past and that should be enough.

Why it’s Not Enough

As a white person, if I didn’t have a feeling of safety when me, my husband and/or children go outside our home to do everyday things, or are denied access to medical and mental health quality care, a guaranteed good education, decent wages,  a way out of poverty, equal career opportunity, and a consistent sense of justice — or if I had to work twice as hard to get people to respect me or be acknowledged for my work as my white peers — I would never say, “Oh well, that’s good enough.” I’d be angry. Sad. Frustrated. Fearful. Despondent. As in, will this ever really get better?

If I had to boil down the meaning of the three powerful words —  Black Lives Matter — into two words, it would be —  Enough Injustice.

It’s heartening to witness the numbers of people of every ethnicity and race raising their voices as well as speaking with their feet in solidarity.  Protesting is a step. Let’s keep marching towards making real change in health, education, employment, poverty and the justice system.  (All important to the human race.)

As you know, my passion is bullying prevention. What is the definition of bullying? Creating an imbalance of power using repeated, intentional behavior meant to diminish others. Racism is an institutionalized and widely accepted form of bullying.

In the absence of love and belonging, there is always suffering. — Brene Brown

The absence of love and compassion and the basic right to belong is at the mean spirited heart of bullying. It is also at the angry heart of racism. So perhaps that’s where we start: love and belonging.

I have so much hope in you — the next generation of parents.  You’ll help those that started this march towards equality reach more meaningful finish lines. You’ll be carrying your children on your shoulders.

As a country, we can never have enough bravery, compassion and support on the road to true freedom for all.  We veered off that road. Let’s find our way again…together.