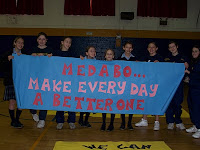 Today starts a series on what can be done to stop bullying incidences in just 10 seconds.

In Just 10 seconds YOU can help stop mean behavior that leaves a long tail of pain. In just 10 seconds…and if you call now (whoops, forgot that this is NOT actually an infomercial).

You overhear three tween girls do what many tween girls do so well. Talk about other girls. It almost seems like a sport and it doesn’t matter if the girls are basically nice or not. They usually are nice. You happen to be one of the tween’s parent. It’s awkward because you don’t want to embarrass your child and you hate to admit it but you’re just a little bit relieved that she is not the one being discussed. She has friends.

But is it good for your daughter to continue doing this or is it a really important teachable moment? I’m fairly certain that girl relationship experts Rachel Simmons and Rosalind Wiseman would say… step up. It’s just as important for the girls who are gossiping as much as it is for the girl being verbally dismembered. Girls need to learn how to be loyal. Those qualities strenghthen them through life, including careers.

In ten seconds, you can step in, look them in the eye and say,

“Girls, I don’t know if you realize it but that’s mean and I don’t think you girls are actually mean. So, how was school today?”

(In other words, make your point and get out.)

They might not show it but they will hear your message. And maybe you’re the only one brave enough to say it. When your daughter is older, more mature and has her own tween, quite possibly she will be stepping up to a group of three tweens and saying,

“Girls, I don’t think you realize it but…”

Life is funny. It sometimes only takes 10 seconds to make a lifetime impression that gets paid forward. And who doesn’t have 10 seconds to spare an unsuspecting target as well as help young fairly clueless girls become mature adults?